Throughout 2005, we have had to deal with Penny and sometimes Henrietta being egg-bound. This is when they have difficulty in expelling their eggs. They look and feel very ill and uncomfortable, and it is very distressing all round.

We don’t know very much about the condition, but understand that it is due mainly to a lack of calcium in their diet. This may be part of the reason, but all of our four hens enjoy the same access to the same food, so there has got to be some other factor as well.

About once a month this past year, poor old Penny is the one who suffers from this condition. The way we have dealt with this is to bring her indoors and get her warm and quiet. Daniel has made up a portable nest box which we bring in from the caravan in case she wants to use it in a hurry while indoors. When she is warm, we let her return to the hen house to use their familiar nest box. We are careful not to handle her unnecessarily, and are very aware that we could accidentally break the unlaid egg. In fact, this has sometimes happened, but luckily, the shell is not hard but simply a membrane, thus making itself difficult to lay, but also resulting in nothing sharp to cause any damage. The broken expelled egg is quickly eaten up by the other hens. Soon after, everything seems to return to normal.

We have increased the amount of calcium in their diet – most winter mornings Daniel would prepare four bowls of cereal with warm milk, adding to this crushed cuttlefish bone, commercial minerals and Citricidal. The hens gulp this down, but we feel that with Penny’s beak being compromised by de-beaking as a chick, she perhaps does not get as much as the others, though under our supervision, the difference is minimal.

One morning in February 2006, we had brought in all the eggs from the nest box and a little later happened to be near the enclosure when Penny emerged from the hen house squawking loudly to announce the fact that she had just laid her egg. We picked up the egg and could barely believe our eyes: it looked enormous, so we simply had to weigh it. 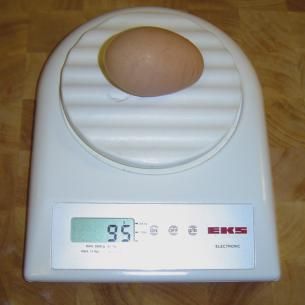 The average old fashioned size 3 egg weighs between 45 and 55 grammes. The eggs available in the supermarket labelled extra large weighs between 65 and 75 grammes. Penny’s egg weighed in at a whopping 95 grammes: what a whopper! We were so impressed that we simply had to take some photos of them.

And all along we thought that she was one of the weaker hens. Poor Penny! That’s like laying 2 eggs in the same day at the same time. No wonder she was always the one getting egg bound!

Once a week now we give them sardines mixed with boiled rice. Since then, the shell of their eggs has become noticeably thicker and harder, and happily, Penny has not had any more episodes of being egg bound, though she continues to lay eggs in excess of 84 grammes in weight. . But think about it. Her body weight is around a kilo and a half. 94 grammes is around 5% of that. 5% of your own body weight – every day!