During the Spring of 2005, we spent a lot of time in the garden, finished off the aesthetics of the hen enclosure, 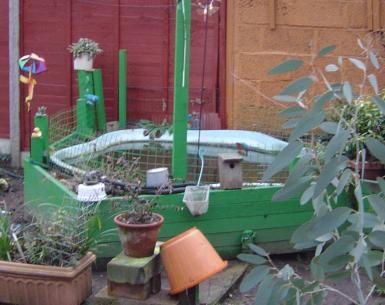 We had found a few mice in the garden as well, during this time. There was a nest of them long before the hens arrived, so it has nothing to do with food and grain being left out in the garden which might attract rodents. We used safe and humane traps to rid our garden of these mice, but of course, there are always more.

The movement was made by a little mouse. Just as I had identified it, Penny in one deft swoop struck at its head with her beak, picked it up by its spine and held it up towards the sky, then parted her beak to let it drop into her mouth and gullet, moving her head backwards and forwards to aid its deathly descent, then pulled her head back with beak facing the ground in a satisfied nod. The mouse was no more.

I could barely take in what I had seen. The whole scenario had the drama of a fragile young woman who had been so terribly hurt by a useless selfish bounder and, having lain in wait for him, had pounced, piercing his heart with the stiletto heel of her shoe in one swift blow, then standing over him to watch the life drain from his wretched body as he – as is the fashion of cowards – pleads with her to save him, only to see the curl on her full red lips twist from disdain to satisfaction, revenge being sweet.

I looked at Penny in awe. Still wide-eyed, I called over to Daniel who was by the pond. He had missed it all, but Penny didn’t help him in any way. She just picked up from where she had left off before the mouse, and continued in the most nonchalant manner to eat the grass around her, while the world continued to turn.

Over the next few days I looked for remains of the mouse but found none – no sign of teeth, tail, skull or fur anywhere either in the droppings or anywhere else in the garden. I suppose if a whole walnut can be digested by a hen, then a mouse would have no chance. Penny enjoys a deep-seated and well-earned respect from us. Underestimate the inner strength of a woman at your own cost!